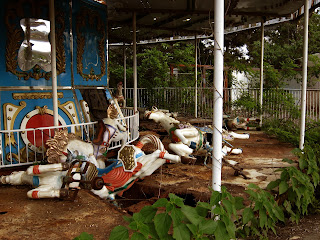 1. Tell me which amusement park featured in the two articles that you would like to visit and take your camera along and what about that park made you want to go there.

There's no doubt about it, I'll choose to attend Okpo Land, South Korea. That place just screams at you to just stay away, but I've been dying to see that place up in personal after hearing and seeing so much about it on Tumblr a couple of months ago. Though I wouldn't go alone in fear of being, y'know, not being seen again or dying in some tragic event after visiting. Not to mention bringing a good amount of salt and iron with me just in case... Seriously, you never know... but, man,  I could capture some really eerie and ominous photos from that place.
3. Think of at least FIVE other unusual places you think would be of interest to photographers. List them.

4.  If you find that someone has already started - post at least one photo of their work. 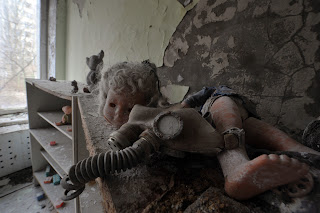 
5. Write a paragraph about why you think that it would be fun to document that location.

Well for one thing, Chernobyl is immensely a photographers heaven for capturing eerie and ominous photograph. Though a bit dangerous, considering it still has traces of radiation around the whole location... but a little adventure won't kill you as long as you follow the rules. Not to mention there are a lot of abandon apartments, playgrounds, and areas all around Chernobyl where you can take photos of.

6.  Tell me what it would take for you to go and take photos at your location.

I'm pretty sure you need to get permission to access the premises first before you're able to actually take photos in this location considering it is still active with radiation. For equipment wise you just need to bring your camera, or camera phone - which ever one you prefer better. Don't forget to supply yourself with extra layers of warm clothing, a flashlight, cellphone, and etc. just in case you need assistance, are injured, or get lost in a foreign nation. Traveling expenses are another thing, you actually need to save up money and see what's going to work for your plan.
Posted by Unknown at 9:00 PM